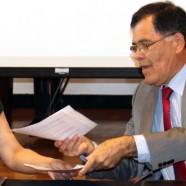 The Ministry of Public Infrastructure (MOP because of its acronym in Spanish) will use the National Laboratory of High Performance Computing (NLHPC) at Universidad de Chile Center for Mathematical Modeling (CMM) to analyze the climate change effects in future infrastructure investments.

The public office signed a Framework Agreement with the Faculty of Physical and Mathematical Sciences to use Lefraru supercomputer, which is the most powerful in Chile and the second fastest in Latin America, according to Lartop 50 ranking. The objective is using it to project hydraulic infrastructure, early alert system for catastrophes, and other investments in a Chilean context where droughts, earthquakes, floods, forest fires, volcanic eruptions and other phenomena are frequent.

However, there is more. The agreement allows the ministry to research on these issues with help of researchers at CMM and Centro de Ciencia del Clima y Resiliencia (CR2) as well as other scientists at the faculty.

“How won’t be interesting for researchers to think what will happen with infrastructure next 20-30 years?” asked CMM researcher and NLHPC scientific director Jaime San Martín.

MOP Planning Director Jocelyn Fernández stressed the need of more collaboration between University and State in these subjects.

“It is required to develop knowledge and learning around these natural events. The climate change has played as a motor that provoke catastrophes,” Fernandez said. “2015 was the hottest year ever in the world; since near eight years ago in Chile we have drought, while we have witnessed rainfall phenomena with catastrophic effects, such as occurred in Atacama”.

Leftraru works due Conicyt funding. It was opened in May 2015 and its capacity allows to process big data. It is available for all the Chilean scientists for free and, today, is in a funding renewal process. In this new stage, different public offices could use it, too. For example, Agencia Chilena de Calidad de la Educación has also used this infrastructure.

“Universidad de Chile works in that way for the society. The excellence of the academy puts its capabilities at the service of the State and fulfills the mission of the University that people value the most,” said Patricio Aceituno, dean of the Faculty of Physical and Mathematical Sciences.