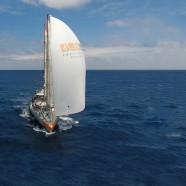 Tara schooner left Lorient port (France) on May 28 and entered the Pacific on July 14 to begin a new scientific mission. It aims to measure the impact of climate change on coral reefs in the Pacific Ocean. This huge work will involve Universidad de Chile Center for Mathematical Modeling.

Organized by the Fondation Tara Expéditions, Tara Pacific scientific mission has the potential to open lines in multidisciplinary research by linking molecular biology, bioinformatics, and genomics, areas where Universidad de Chile’s centers of excellence stand out.

Among the French world-renowned scientists at Tara expedition is Eric Karsenti, molecular biologist and scientific director of Tara Oceans expedition from 2009 to 2012. In 2015, he was awarded CNRS gold medal, one of the highest honorary titles for a researcher in France.

Since 2003, the Fondation Tara Expéditions conducts scientific missions to study and understand the impact of climate change and the ecological crisis in the oceans.

Tara Pacific (2016-2018) is the second expedition worldwide after Tara Oceans (2009-2013), which studied the plankton. The data collected by Tara Oceans research (35,000 samples which identified 40 million new genes) is currently available to the global scientific community. It considered a real treasure to study and understand the oceans.

In order to facilitate access and use of these data by the southern countries, the Fondation Tara Expéditions and the Fond Français pour l’Environnement Mondial (FFEM), initiated a scientific cooperation plan with six countries. Among them, Argentina, Brazil, and Chile are. This initiative seeks to train new PhDs and researchers in the development of new indicators and instruments to improve the management of the ocean and its resources.

The purpose is to use the data generated by the project to understand how communities of marine microorganisms are organized and then to apply this knowledge in solving problems of the Southern Cone’ seas.

At Universidad de Chile, this academic network is led by Alejandro Maass, deputy director of the Center for Mathematical Modeling (CMM); Jaime Campos, Department of Geophysics professor and director of the Program and Disaster Risk Reduction (CITRID) and Mauricio González, researcher at the Center for Genome Regulation (CRG).

“In an exploration like this, which is comprehensive and systematic, you can perform many researches. In red tide, for example, which is a consequence of climate change, you can deepen on the movement of water layers, the fluid dynamics. It is multiparametric. The massiveness of their data also allows you to generate knowledge at planktonic level useful to characterize it. That is another example. When this characteristic changes for any reason, you can use this to understand how it evolves,” Maass said about research possibilities opened by this scientific journey.

For this purpose, Fondation Tara signed a partnership with the Center for Mathematical Modeling to generate information, analyze, and monitor molecular biology and, in general, the factors causing climate change on oceans specifically in the Pacific –together Center Regulation for the Genome. The expedition to Easter Island, the postdoctoral students exchange, and the last September 9th seminar are the first steps to consolidate this agreement. In addition, the study of the metabolic capabilities of communities collected by Tara Oceans expedition will start.