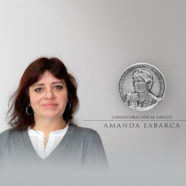 Salomé Martínez Salazar, a professor in the Department of Mathematical Engineering and researcher at the Center for Mathematical Modeling (CMM), received the award in a virtual ceremony, becoming the forty-second woman to receive this honor in the history of this university.

The highest academic authorities of the Universidad de Chile and the Faculty of Physical and Mathematical Sciences, together with the family and loved ones of the recipient, gathered in a virtual ceremony to pay tribute to the achievements and significant contributions made by the academic Salomé Martínez in her academic career, both in the area of mathematics and in the opening of a new social order within the institution to correct cultural and labor inequalities in terms of gender.

The University of Chile organized a solemn ceremony, having previously presented her with the traditional diploma and the silver medal of this award instituted in 1976 to highlight the personality and work of university women who have stood out with exceptional achievements in the field of their profession, in the field of culture or in the service of the country. “We should be afraid of self-indulgence”

Salomé Martínez addressed the audience quoting Amanda Labarca, in her call to defend democracy and urging to fight for education to reach all Chileans, men and women united in a commitment to the collective.

In this sense, the academic expressed feeling fortunate for her opportunity for academic development and extended an invitation to her peers to share this fortune. “The problems have no owner and if we can help, we have to do it”, said the academic regarding the responsibility of the university community.

“My contributions in education are what I am most proud of and that was given to me by mathematics”
— Prof. Salomé Martínez

She highlighted the qualities and opportunities offered by the freedom of mathematics – her discipline – as a tool that allows us to pose and solve society’s problems. She expressed her wish that girls and boys can have access to understand it and use it to reason and draw conclusions, describing it as a process that is learned and practiced. She also emphasized the importance of the mathematics learned in schools containing relevant blocks for the development of students.

“My contributions in education are what I am most proud of and that was given to me by mathematics”, concluded Salomé Martínez regarding her trajectory in significant projects to contribute to school education methodologies. In terms of her personal experiences as a university woman and later as an academic at the Faculty of Physical and Mathematical Sciences, Professor Martinez highlighted the actions that have been implemented to correct cultural discrimination inherited from Chilean society.

The fact that FCFM has taken responsibility for “the right to gender equality gives us pride and places us in modernity,” said Salomé Martínez, mentioning the accreditation process being carried out by the Faculty’s pioneering Directorate of Diversity and Gender. But she warned that “we must be afraid of self-indulgence. This is a long and hard road to equality and we have challenges ahead”.

In this regard, her reflection pointed to the lack of breadth of public policies to meet the changes demanded by society, considering that there is a tendency to install basic measures. She also spoke of an attitude present in the leadership to “relativize gender violence” and “not honoring the truth”. She called for an effort to “detect where we fail” and analyze the prevailing hierarchical system that perpetuates inequalities. Likewise, she called to work for a renewal of leadership, to stress and challenge the spaces of power and thus achieve a virtuous combination between tradition and innovation, proper of universities of excellence.

Salomé finally said she felt privileged to belong to the University of Chile, which allows these discussions. Rector Ennio Vivaldi publicly congratulated the academic awarded by the University of Chile, both for her notable roles and contributions in mathematics and education, and for having anticipated early on these social changes regarding gender, contributing to the installation of new viewpoints and instances, highlighting her as the first director of the Diversity and Gender unit of the FCFM.

“The gender issue will drastically change the structure of society (…) from here will come out another society different from the one we know. We celebrate this feat of feminist expressions”, added the Rector, emphasizing the contribution of Salomé Martínez in these processes of cultural changes that we are living.

Likewise, the 2018 Amanda Labarca Awardee, Cecilia Albala, participated in this solemn ceremony with a moving speech to highlight the trajectory of Salomé Martínez. She shared to the audience human aspects of her life, her leadership in women’s rights and contributions within the FCFM, and highlighted the profuse national and international recognition she has received for her work in education.