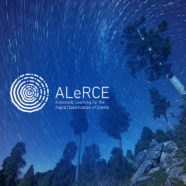 With the support of several universities and research centers in Chile and the United States, a group of Chilean scientists developed “ALeRCE”, a project that uses artificial intelligence to detect the most relevant events in the observable universe.

A supernova, an asteroid or a supermassive black hole engulfing a star. In one night, tens of millions of astronomical events can occur before the lens of a telescope and it is practically impossible to process all the phenomena that observatories can capture from Earth. So how can we know which event is more relevant than another in the avalanche of data arriving from space?

The answer was proposed by scientists from the Center for Mathematical Modeling (CMM) of the University of Chile and the Millennium Institute of Astrophysics (MAS), who together with the Data Observatory (DO), the National Laboratory for High Performance Computing (NLHPC), and with the collaboration of nine universities and several research centers, developed a system for data processing in astronomy. Through data science and Artificial Intelligence, the researchers generated a way to highlight and identify the hundreds of thousands of events that occur in the observable universe. This is known in the discipline as “astronomical brokers.”

“We built an astronomical broker called ALeRCE (Automatic Learning for the Rapid Classification of Events). We operate every night, analyzing the information captured by the telescopes, and we provide this service to the astronomical community of the world,” said Francisco Förster, PhD in Astronomy and CMM researcher at the University of Chile.

To understand this, it is necessary to specify that there are two types of astronomical telescopes. First, there are telescopes specialized in monitoring the general panorama of space, which can identify changes or phenomena that appear over time. On the other hand, there are telescopes dedicated to tracking a particular astronomical event, such as the birth of a black hole, supernova, asteroid, among others. In short, the follow-up telescopes receive the alerts generated by the monitoring telescopes, to pay attention to a specific event in the observable universe.

The monitoring telescopes are not necessarily large in size, like others that will have mirrors up to 40 meters in diameter, such as the Vera Rubin Observatory, which is being built in the Coquimbo Region. However, they have a very large digital camera, up to 3 billion pixels. A single image can cover an area tens of times the size of the Moon, and every three nights, on average, it is possible to capture images of the entire universe visible from the southern hemisphere of the Earth.

In order to be able to discriminate which event is relevant in the information captured by the monitoring telescopes, the astronomical brokers identify through Artificial Intelligence where and when a considerable event occurs to follow it up, among the millions of changes that can be observed during a night.

“We set up the infrastructure, the way to communicate so that all parts of the astronomical ecosystem can talk to each other, without human intervention. We use classifiers through machine learning. We verify the quality of the data and help to do science,” said Förster about the importance of this system that optimizes the study of the universe.

ALeRCE is already providing its services to different observatories around the world. There is an astronomical group in California called “Las Cumbres Observatory”, which received funding from Google to build robotic telescopes around the world. They receive in real time what ALeRCE produces every night from the reception of signals, with hundreds of thousands of alerts per night.

Currently, this astronomy broker processes the alert stream from the Zwicky Transient Facility (ZTF) and aims to become an official astronomy broker for the Vera C. Rubin Observatory, which is under construction in Chile and expects to be ready within the next few years. “We use hybrid infrastructure models (on-premises and cloud) and machine learning to bring real-time processed products and services to the astronomical community,” Förster concluded.