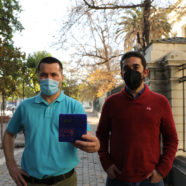 The prototype, created by researchers at the University of Chile, makes it possible to evaluate how dangerous an enclosed place is in the face of the risk of COVID-19 infection. The scientists have already implemented this low-cost reader in some of the country’s educational institutions.

How to measure the risk of contagion in an enclosed space? There are many parameters, beyond the use of a mask and alcohol gel, to consider how safe it can be to be with other people in the same place. Researchers from the University of Chile state that it is not enough to know the parameters that are currently used, for example the square meters of an enclosure. Ventilation, in this case, plays a key role in prevention during this pandemic. This is why they designed a device capable of determining how safe an enclosed space can be dynamically and in real time.

This is an initiative driven by scientists from the Center for Mathematical Modeling (CMM) and the Center of Excellence in Astrophysics and Related Technologies (CATA) of the University of Chile, with support from Fablab and OpenBeauchef U. de Chile. They created and designed a low-cost device capable of measuring the levels of carbon dioxide in an enclosed space to determine how ventilated and, therefore, how risky it can be to be in an office, a laboratory, a classroom, or any other enclosed space to be exposed to a viral contagion.

Specifically, Francisco Förster, PhD in Astronomy from Oxford University and CMM researcher, together with Ricardo Finger, PhD in Electrical Engineering and CATA researcher at the University of Chile, created this device that monitors CO₂ levels in real time, and then sends the data to a cloud that is constantly updated. 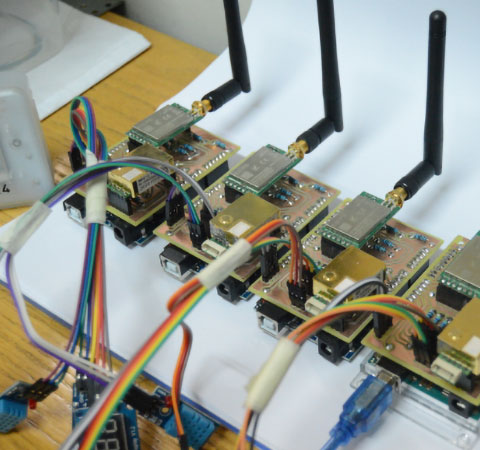 “The heart of the device is a sensor that measures the concentration of CO₂, emitting infrared light that is absorbed by carbon dioxide molecules in the air,” explains Francisco Förster. This measurement is displayed on a screen, and when the concentration exceeds a threshold of 700 particles per million, an alarm signal is triggered.

“Currently we rely a lot on the use of reduced seating capacities, but it is not well directed to the underlying problem, which is the recirculation and reuse of the air we breathe,” details Ricardo Finger on the motivations for generating this device.

The concentration of CO₂ detected by this sensor, as well as temperature and humidity, are transmitted by radio signals to a central, which can monitor dozens of sensors at the same time. “The central is connected to the internet via wifi, and is in charge of uploading the data to the cloud. Once in the cloud, the data can be consulted through an interface that feeds a web page where it is possible to consult the historical values of any sensor in the network,” says Förster. 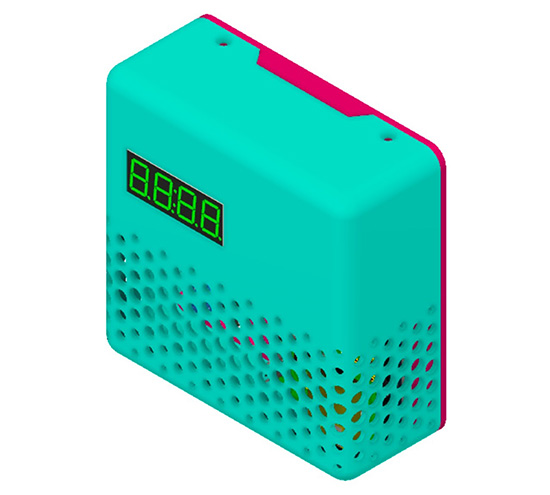 The Rector of the University of Chile, Ennio Vivaldi, said that “since the beginning of the pandemic we have been available to the community, seeking and proposing solutions to address the pandemic and its consequences. Devices such as this one allow us to have fundamental evidence to evaluate gradual policies that do not cause an aggravation of the current situation”. In addition, the Rector invited decision makers to consider this type of proposal as part of the solutions to the management of the pandemic.

CO₂ and ventilation as keys to pandemic control

A series of studies compiled by the International Laboratory for Air Quality & Health suggest that the spread of coronavirus occurs primarily through the air, via respiratory aerosols emitted by people. Hence the importance of analyzing the level of carbon dioxide, which reflects how ventilated a place can be. Initially, this sensor created by scientists at the University of Chile is intended to be installed in classrooms.

The creation of this sensor arose from the premise that the places with the highest risk of contagion would be those with poor ventilation, occupied by a large number of people. With the arrival of winter, these ventilation levels could even worsen, due to poor air circulation to prevent heat from escaping. 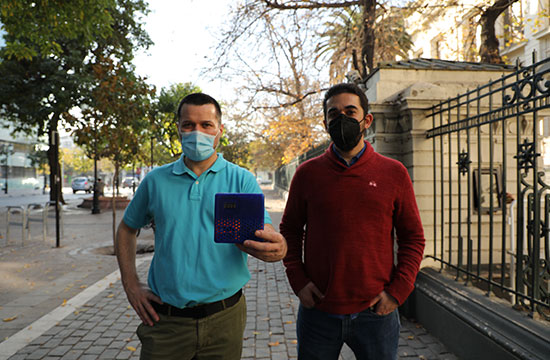 Ricardo Finger affirms that, based on this project and the scientific evidence behind it, “we must move from a static seating capacity, based on square meters of surface area, to a dynamic capacity based on air quality measured on site and in real time”. Francisco Förster adds that “the only way out of this pandemic is to use the scientific evidence, which suggests that airborne transmission is one of the main routes of contagion”.

Currently there are devices capable of reading CO₂ levels in a controlled environment, but at very high prices of around 400,000 chilean pesos each. In addition, other readers do not store their data in a cloud, nor do they emit signals in real time to mitigate the lack of ventilation in a place.

This carbon dioxide reader (www.airly.cl), created by CMM and CATA researchers, was developed as a prototype and is expected to be commercialized in educational establishments in the short term. They have already received interest from schools and universities, where they have been able to measure its effectiveness.