CMM > News > U. de Chile calls for the establishment of policies to improve public education in Chile

U. de Chile calls for the establishment of policies to improve public education in Chile 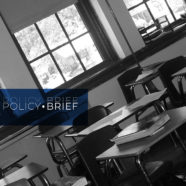 Optimizing territorial planning to increase public school supply through sustainability and equity is the proposal being made by a group of academics and professionals from Casa de Bello.

Thousands of students currently travel long distances in high-density urban areas to attend their schools and high schools. City expansions increase demand and, at the same time, demographic evolution brings changes in school demand in older areas of the cities. A situation that requires reconfiguring the public supply in terms of opening new schools or consolidating others, in addition to their internal organization. However, in order to achieve this objective, it is necessary to implement policies at the national level.

This was stated by anthropologist and member of the Policy Briefs Editorial Committee of the UCH, Professor Paulina Osorio, who pointed out that it is necessary to “generate innovative policy proposals for the Chilean institutional reality. Since we are dealing with public education policies and efficient allocation of resources, the proposals must be generated from an interdisciplinary perspective and based on a deep knowledge of the reality in question.”

Pablo Riveros, Head of the Transdisciplinary Networks Unit of the Vice Rector’s Office for Research and Development of the University of Chile, stressed the importance of preparing documents with a public university perspective that directly benefit society. “The way to influence public policies is through the standardization of a set of processes associated with the strengths of the academic groups themselves in building ties with social actors or decision makers. The documents developed are available to the community in general, as a tool for permanent consultation,” he said.

Through an editorial committee made up of members of the different vice-rectors’ offices and academics from different disciplines, the Universidad de Chile makes proposals to influence public policies that have an impact on the improvement of the social, economic and —in this case, educational— aspects of the country.

A good educational planning system should structure an offer that satisfies requirements of quality, coverage, location and accessibility. This, using evidence-based planning instruments and incorporating the spatial, geographic and demographic dimension in the construction and consolidation of the public supply.

Jorge Amaya, a researcher at the Center for Mathematical Modeling (CMM) of the University of Chile, pointed out that it is necessary to establish a system of territorial analysis, “led by the Ministry of Education, to monitor the demographic evolution of Chile and to anticipate urban expansion at the national level, in order to plan the educational resources to be allocated, including infrastructure. This requires a lot of coordination with the local authorities, such as the municipalities, the local education services (SLE) and the governorates.”

Catalina Canals, a researcher at the Center for Advanced Research in Education of the University of Chile, pointed out that “the key to improving territorial planning of public education is to have a planning policy that monitors changes in school demand. There are neighborhoods whose composition is changing, generating a lower need for schools, while other sectors, as a result of local or international migrations or urban changes, begin to congregate a new population. A territorial planning policy should monitor these changes in order to adapt school supply to local requirements. However, it is not enough to monitor these situations; it is necessary to rely on technical tools to project variations in demand.”

Reduction of enrollment in public schools

In Chile, with compulsory school education, almost universal coverage and a system that allows families to choose the educational institution to which they send their children, the problem of school location is crucial.

There are several factors that have contributed to the decline in enrollment in public schools. One of them has been the limited capacity of the public sector to respond to school demand, while the private subsidized sector was able to create a large number of new establishments. Thus, in the last 20 years the public sector has reduced its enrollment, representing today less than 40% of the total.

Catalina Canals argued that another factor to consider is the structural difference between the public sector, the private subsidized sector and the private paid sector.

Jorge Amaya and his team developed a mathematical model to find the optimal educational offer. In this way —and in order to satisfy community demand and rationalize resources— it is possible to determine which establishments should be opened or closed, with which educational levels and how many courses per level.

This mathematical and computational model considers demographic evolution, which depends on converging phenomena such as migration (both from abroad and within the country), the expansion policies of large cities and the emergence of new urban centers. Another element to consider is the relative aging of certain communes or geographic sectors, the plans and programs of the authorities in each territory in terms of school management.

“The model should be supported by geo-referencing technologies, which allow, for example, to plan in time the creation of basic schools where young families with younger children are arriving. It is also designed to provide a strategy for 10 to 15 years and allows the integration of the reality of several municipalities or an entire region. In addition, it relies on modern algorithms and data analysis techniques and can simulate scenarios in a few minutes depending on the size of the territory being analyzed. Historically this has been the responsibility of each commune, but it is clear that this is not the most efficient and does not necessarily point to equal opportunities,” explained Professor Amaya.

It is hoped that with the integrated work through the local education services (SLE) we can finally reach the construction of a well-planned and coordinated system, which will finally give value to public education. We hope that the responsible authorities will be open to collaboration with academia, which has much to contribute to this public policy.