Mathematics increases the resolution of MRI measurements of tissue stiffness Mathematicians at CMM, in collaboration with scientists from the Netherlands and Germany, have developed a mathematical theory and algorithm that overcome some of the major challenges associated with magnetic resonance elastography (MRE).

Manual palpation has been used diagnostically for centuries to assess tissue stiffness, with breast and prostate cancer screenings being well-known contemporary examples. However, only advanced imaging techniques, such as magnetic resonance elastography (MRE), enable non-invasive mapping of liver and brain tissue mechanics. Mathematicians at the CMM, in collaboration with scientists from the Netherlands and Germany, have developed a mathematical theory and algorithm that overcome some of the key challenges associated with this technique. The resulting human MRI data are promising, as evidenced by more detailed, high-resolution reconstructed images of stiffness in brain tissue published in Medical Image Analysis.

MRE is an emerging technique used for non-invasive and quantitative imaging of the viscoelastic properties of soft tissue. Since scientists at the Mayo Clinic first formulated the principles of MRE in 1995, the technique has advanced and proven effective for monitoring the progression of various diseases, including liver fibrosis and neurological degradation. MRE involves generating a vibration wave that is transmitted through the target tissue using a mechanical device and imaging the wave with an MRI scanner. Stiffness of the target tissue is subsequently inferred using physical and mathematical laws of wave propagation.

‘However, it is important to note that the MRI scanner does not directly make an image of the wave’, says Cristóbal Bertoglio, assistant professor in mathematics at the Bernoulli Institute for Mathematics, Computer Science and Artificial Intelligence, University of Groningen and former researcher at the Center for Mathematical Modeling (CMM) at the University of Chile. ‘The scanner actually produces and measures a magnetic field in the tissue, represented by a precessing vector. But the precession speed increases with both the amplitude of the wave and the strength of the magnetic field applied by the MRI’, he explains. ‘A major challenge is that you can’t be sure whether the vector’s angle corresponds to the first, second, or more laps, as you do not know, a priori, the actual amplitude of the wave’. 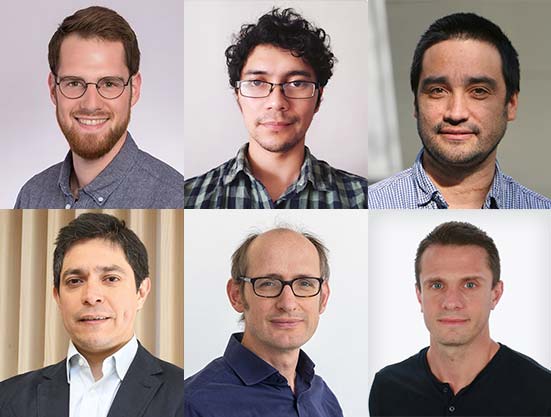 A possible solution could be to apply a very low magnetic field to reduce the angle, thereby ensuring that it corresponds to the first lap. However, the noise in the image of the wave then becomes amplified, leading to a considerable decline in the quality of the stiffness maps. This problem was tackled by measuring two separate images at different magnetic strengths and then combining them. However, no theoretical model existed for combining two or more measurements. ‘Therefore, the combination was usually done by trial and error, which led to the generation of artefacts in the resulting elasticity maps’, Bertoglio explains.

In collaboration with Helge Herthum, who is a member of the MR Elastography Group at Charité Universitätsmedizin in Berlin and Hugo Carrillo, a double-degree PhD student between the University of Chile and Groningen, the researchers developed a general theory for establishing combinations of different sets of measurements. ‘We started from general MRI theory and derived a sub-theory, which describes the combinations. This way, we created a theoretical model that made sense.’ This theoretical model was then tested on a set of actual MRE brain data, in which measurements were combined using several magnetic fields of varying strengths. The result was a low-noise map without artefacts. ‘We can now generate better elasticity maps to measure the stiffness of tissues, which allow us to see more details.’

Bertoglio plans to work with biologists, radiologists and neurosurgeons at the University Medical Center Groningen, using the new technique to assess brain tumors. He explains: ‘Tumors can be hard or soft, and require different surgical approaches to remove them. It is therefore very useful to use a non-invasive method to determine the stiffness of the tumor before an operation’. Drug delivery using nano-carriers could be another potential application: ‘The type of carrier that should be used may also depend on the stiffness of the tissue’. 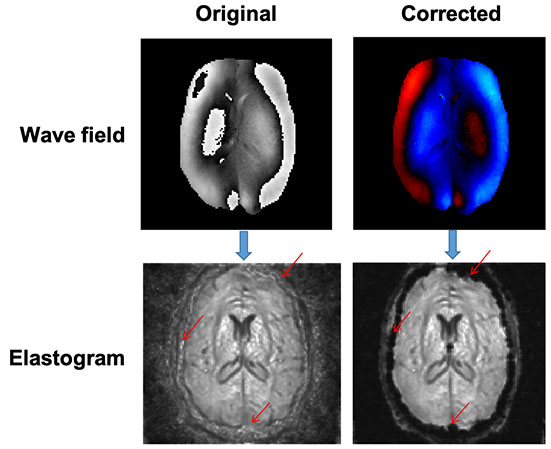 In the original MR Elastography measurement (upper left panel), the wave field presents some artifacts (the sudden changes from light to dark and vice versa). Using the new approach (upper right panel) these artifacts are no longer present. These wave fields can be converted into stiffness maps or “elastograms” (lower panels). The elastogram using the original measurement shows tissue where it is not actually present (red arrows), as can be seen on the elastograms made using the improved method. | Illustration C. Bertoglio, University of Groningen

Bertoglio began developing mathematical models of MRI scans while at the Center for Mathematical Modelling at the University of Chile in Santiago, Chile, where he worked in close collaboration with Professors Axel Osses and Sergio Uribe, through Hugo Carrillo’s doctoral thesis. ‘This work focused on the combination of two measurements in blood flow imaging’. He later moved to Groningen and established contact with Professor Ingolf Sack from the Charité group. ‘We recognized the great need and potential of this technique in MR elastography, and we were very lucky to have Helge on board from the beginning. We had a great interdisciplinary and international team of collaborators, which made these results possible.’