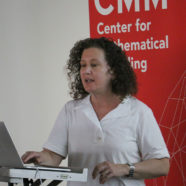 The Chilean Academy of Sciences elected Bryna Kra as a foreign corresponding member at its extraordinary election session on January 11. Kra holds a Ph.D. in Mathematics from Stanford University, USA and is president of the American Mathematical Society (AMS), an academic at Northwestern University, and a member since 2016 of the American Academy of Arts and Sciences. She specializes in applications of ergodic theory and dynamical systems, particularly in problems motivated by combinatorics and number theory.

Prof. Kra recently visited Chile to give classes and lectures at the Center for Mathematical Modeling (CMM) of the University of Chile, a center of excellence with which she has collaborated for years and which she has visited before. Kra is also a member of the CMM International Scientific Committee.