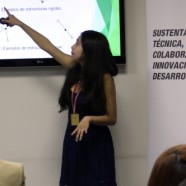 The competition was born in 2008 by Modesto Collados, graduated at Beauchef Campus that had an intense guild life and showed great interest in Mathematics. This year the contest had two problems: one on Geometry and another on Numbers.

The organization received 80 proposed solutions to the challenges.

“With this high participation, the competition consolidates its position among young audiences,” commented CMM director and jury’s member Alejandro Jofré about the contest.

For Cristian Hermansen, Colegio de Ingenieros president, “this is a demonstration that young people are worried about Math. Solving problems allow to us to think in a better world.”

On the occasion, the honorable Mentions for the Number’s challenge went to Luis Vidal, from Universidad Federico Santa María, Cristóbal Avarca, from U. de Chile, and David Torres, from Universidad de la Frontera.

To end the awards ceremony, Claudia Castro explained how she solved the geometric problem.