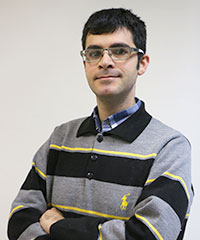 Research Area:
Stochastic Processes, Ergodic Theory and Stochastic Modeling
Research interests:
Hagop Tossounian obtained his PhD in mathematics from Georgia Tech under the supervision of Michael Loss and co-advised by Federico Bonetto in 2017. Before that he earned his masters degree in mathematics from the American University of Beirut under the advising of Michel Egeileh.

In his PhD thesis Hagop worked on Mark Kac's model in kinetic theory, part of mathematical physics that studies how particle distributions evolve under collisions and other interactions. In particular he studied how fast particles which undergo collisions in a rule described by Kac cool down using various metrics and under various thermostating conditions.

Besides kinetic theory, Hagop loves functional inequalities and is interested in calculus of variations and evolution equations.

Comments:
Under the supervision of prof. Joaquín Fontbona. This postdoctoral research received funding from FONDECYT.