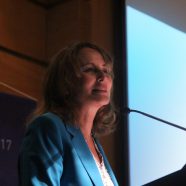 “Everything is a part of the ocean, which is a communicating vessel of the planet. Studying it implies a great effort of planetary solidarity.” By using these words, ambassador in charge of international negotiation for the Arctic and Antarctic Poles and former Minister of Environment of the French Government Ségolène Royal contextualized the importance of the work carried out by the Center for Mathematical Modeling (CMM) together with the Center for Genome Regulation (CGR) of the University of Chile to analyze the data produced by the French expedition Tara. Her statement was made at the Tara 2017 Regional Seminar: Global Challenges for Ocean Science and International Policy Today.

The activity –organized by CMM, Future Congress, French Embassy and Tara– brought together scientists from Argentina, Brazil, Chile, Colombia, Ecuador, France, and Peru. They met with Chilean and international authorities, parliamentarians, and the general public.

They reviewed Tara’s work collecting samples from the ocean. The group also discussed how to analyze these data to understand the evolution of the sea. The work allows them to study the effects of the climate change and economic exploitation.

French biologist Eric Karsenti was the main speaker. The scientific director of the project explained the expedition’s trip to understand the sea as a key resource.

“Something is been going on for 40 years. The population explosion has had an impact on the ocean, due to technological change and prevailing needs,” he said. “And we realize that politicians are more interested in the role of the oceans in climate change.”

For Royal, this situation calls for global-level research efforts: “The ocean is the domain of research where the most abundant co-operations are seen. It’s a major challenge.”

“The complexity of large data, with the magnitude they represent, cannot be addressed without collaboration. Science is made up of collaboration and complementarity,” he said.

The president highlighted the work of CMM and CGR in the analysis of the information extracted by Tara in the Pacific Ocean.

For the dean of the Faculty of Physical Sciences and Mathematics Patricio Aceituno, this research is in line with the FCFM’s since the 1970s. He remembered how himself joined in the first studies to understand climate change.

“These models were a contribution of science” he said “to make humanity realize that it is facing a major risk. This faculty contributed to see what the risks were.”

Guido Girardi, president of the Future Challenges, Science, Technology, and Innovation Committee of the Senate, valued the political-social impact of initiatives to answer citizen questions from a State level. In that line, he stressed two alliances, the Future Congress with CMM, and Tara’s with the University of Chile.

“The problem is when the State has no answers for the challenges of the future, society will look for them in the populism, most of the times,” he said.

CMM researcher Alejandro Maass, who organized the event, corroborated this point from the work with the French expedition in particular. “Public policies can use these data,” he explained.

Other participants in the seminar were the director for Ocean Affairs of the Chancellery ambassador Isauro Torres and director of the CNRS Southern Cone Olivier Fudym. They gave inaugural speeches.

Andrea Freire, from Brazil; Leonardo Erijman, from Argentina; and regional governor from Magallanes, Chile Jorge Flies made presentations and emphasized the importance of international collaboration and science-based development.

Fabián Avilés gave the voice of the public sector, from Sernapesca. Alfredo Tello, the manager of Intesal Salmón Chile S. A., spoke from part of the private sector.