CMM > Frontpage > Data science in astronomy: A system to optimize the observation of the universe

Data science in astronomy: A system to optimize the observation of the universe 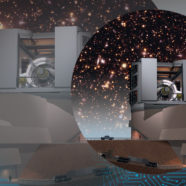 From the frontier between astronomy and data science, ALeRCE consolidates as the first astronomical broker to use artificial intelligence. A breakthrough in the optimization of the study of the avalanche of data perceived from the observable universe.

Supernovae, asteroids and comets are some of the phenomena that pass countless times in front of the lens of a telescope. Which ones are most worthy of attention and how they can be detected in the most optimal way, are answers that ALeRCE (Automatic Learning for the Rapid Classification of Events), an astronomical event identification and classification system, created at the Center for Mathematical Modeling (CMM) and operated with artificial intelligence, intends to provide.

It is an astronomical broker, which is able to identify the changes in the sky that are most relevant to be studied, among the millions of changes detected during a night. “With ALeRCE we analyze the information captured by different telescopes at a rate that has never been possible before, and we provide this service to the astronomical community of the world,” says Francisco Förster, CMM researcher and member of the Data and Artificial Intelligence Initiative (ID&IA) of the FCFM.

ALeRCE, developed jointly by the CMM, the Millennium Institute of Astrophysics (MAS) and the Data Observatory (DO), currently processes the stream of alerts from the Zwicky Transient Facility (ZTF) observatory, located in the United States. The data obtained are analyzed with artificial intelligence, which classifies objects into a hierarchy of astrophysical classes. That is, it uses images and time series, including transient objects -that occur once at defined time intervals- as well as those phenomena that vary periodically or randomly.

The astronomical broker is based on an algorithm model that is fed back day by day and allows generating an early warning of the phenomena identified as relevant. The data collected are filtered and offered to the community, allowing real-time monitoring of these events and facilitating the connection and collaboration of the astronomical system.

For Paula Sánchez, MAS astronomer and Inria Chile researcher, the interest generated by ALeRCE is due, among other things, to its interdisciplinary approach that uses data science to classify the images captured by the telescopes, which differentiates it from other existing brokers. Sánchez, whose role in ALeRCE is to link the worlds of computing and astronomy, emphasizes that the project bridges the gap between these different disciplines through tutorials and training for those who implement these new technologies.

“Chile has always had a passive attitude towards the use of its telescopes, but in this case, ALeRCE is a major player, which allows us to promote our country as the capital of astronomy. Not only for having telescopes, but also for the good use of the data”, says the astronomer.

Ignacio Reyes, electrical engineer of the project and specialist in machine learning, states that the work from artificial intelligence goes through the good design and construction of algorithms, based on previously classified examples. “We present the model with 1,000 examples of supernovae, 10,000 of certain types of stars and the model internally adjusts its parameters, which allows it to make its own predictions,” he says.

The key to ALeRCE, according to Reyes, is to make the necessary adjustments so that the model’s level of prediction is as accurate as possible. With this, it is possible to increase the degree of confidence in the classification of these phenomena captured by the telescope lens.

In Chile, the service seeks to consolidate its position as the official astronomical broker for the Vera C. Rubin Observatory (LSST), which will operate in the Coquimbo Region and will be able to observe tens of millions of events per night. From ALeRCE, Francisco Förster and his team are multiplying their efforts to scale the model to the needs of this astronomical center.