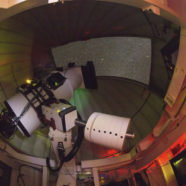 The Chilean virtual astronomical broker ALeRCE – dedicated to classifying time-varying astronomical objects reported by large telescopes that map the sky every night – presented in Ireland a new phase of its project, this time together with the ATLAS telescope network.

ALeRCE (Automatic Learning for the Rapid Classification of Events) was created in 2017 as an inter-institutional collaboration between the Millennium Institute for Astrophysics (MAS) and the Center for Mathematical Modeling (CMM). They were joined by the Data Observatory (DO) foundation in 2020, and the Universidad de Concepción (UdeC) and the Universidad Mayor in 2022, as well as adding researchers from more than 20 national and foreign institutions since its inception.

In a new stage of development, it is joined by ATLAS, a network of four telescopes (two of which are located in Hawaii and two that began operating in 2022 in the southern hemisphere, in South Africa and Chile) whose objective is to detect and provide early warning of asteroids that pose a risk to human life. To achieve this, it observes the night sky four times a night, detecting millions of variable events in the process, which means a large amount of data to analyze.

According to Francisco Förster, principal investigator of ALeRCE, associate researcher of the Millennium Institute of Astrophysics (MAS) and the Center for Mathematical Modeling (CMM), the work now being done by the interdisciplinary team of ALeRCE “is to convert this information provided by ATLAS into a data flow that is crossed in real time with the observations of the Zwicky Transient Facility (ZTF) in California, USA, thus becoming the first broker that combines large data flows in a global multi telescope system. This combination of data will enhance scientific discoveries and increase the resilience of ALeRCE as an automatic classification system for variable objects in the universe.” 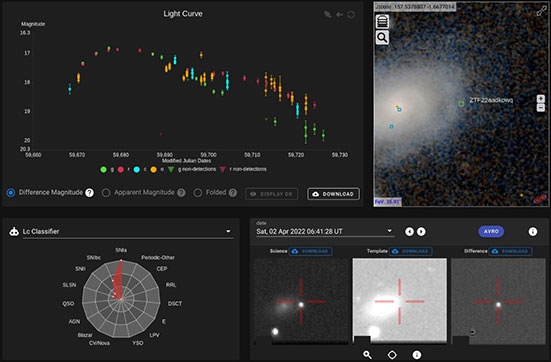 ALeRCE Explorer: top left shows the brightness evolution of a supernova observed by ZTF (green and red) and ATLAS (cyan and orange); top right, an image of the host galaxy before the explosion; bottom left, the most probable classes according to the ALeRCE classifier; and bottom right, the supernova discovery images. All of this information is updated in real time as new data are sent by these two telescopes.

ALeRCE operates with a hybrid infrastructure, processing data mainly in the cloud (AWS-DO), at the National Laboratory for High Performance Computing (NLHPC) and using its own resources, installed at Red Universitaria Nacional (REUNA), a critical point for the exchange of national and international academic traffic. In addition, it uses massive data processing, artificial intelligence and visualization tools to provide early warning to the international community about events of major scientific interest.

“For years we have been developing artificial intelligence tools focused on ZTF. This new stage presents us with new challenges in extending these methods to data from different telescopes. It is like teaching the computer to learn from different sources, just as we humans do,” says Guillermo Cabrera-Vives, leader of the machine learning area of ALeRCE, director of the Data Science Unit at UdeC and adjunct researcher at MAS.

The researcher tells that, since 2019, ALeRCE processes around 300 thousand variable events per night, coming from the ZTF observatory, with a dedicated engineering team, which develops tools for a community of more than six thousand users, in 125 countries. In 2021, this national project was selected as one of the seven community brokers in the world that will classify the more than 10 million events per night that will be reported by the Vera C. Rubin observatory, which will begin operating from Chile in 2024. 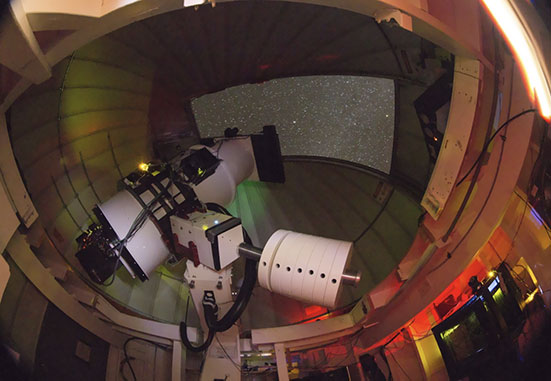 It has also been a pioneer in several aspects: it was the first broker to publicly report its classifications using artificial intelligence; it is the one that reports the fastest and largest number of supernova explosions (more than 14 thousand candidates); it is the first to automatically enrich the data with historical information on billions of objects; and, as of June 2022, it is the first broker to ingest data from the network of the four ATLAS telescopes, located in Hawaii, South Africa and Chile.

Andrés Jordán, Director of the Millennium Institute of Astrophysics (MAS) and Chief of Science Officer of Data Observatory (DO), points out that “the biggest challenges for ALeRCE in the future are to scale up to process the enormous volume of data from the Rubin observatory, incorporate data from more telescopes, and develop new artificial intelligence tools that allow the international community to extract the best science from these observations. In particular, a major challenge is to develop tools to detect those objects of unknown nature that could revolutionize our understanding of the dynamic universe in the next decade”.

Among the most important indicators of ALeRCE is that in one year it has processed more than 200 million real-time alerts, including 40 million images. It has reported more than 6,000 supernovae, 60,000 supermassive black holes and 800,000 variable stars.

More information is available at http://alerce.science/.