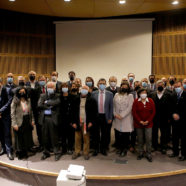 The new institutional framework seeks to strengthen the commitment of the State through permanent funding, which will allow the consolidation of supercomputing as a critical tool for the advancement of science and the development of the country. This is possible after 12 years of high-level operation of the NLHPC, created by the Center for Mathematical Modeling in collaboration with six national universities and REUNA.

In an unprecedented inter-institutional collaboration, thirty-nine universities, four research centers and the Red Universitaria Nacional (REUNA), signed an agreement on Wednesday for the creation of the National Laboratory for Supercomputing, with the aim of ensuring that the local scientific community has the necessary computing resources to maintain a degree of international competitiveness and, at the same time, contribute to the development of the country in a transversal manner, improving the capabilities of the national industry and promoting innovation in the public sector. 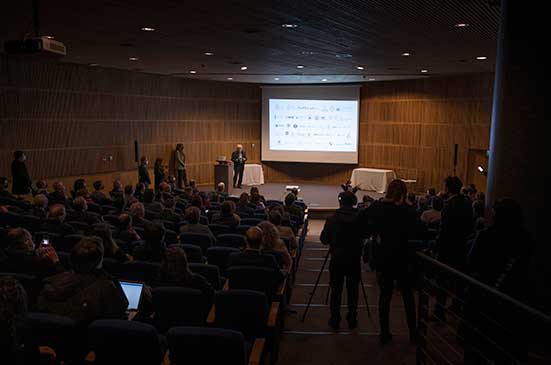 In Chile, state investment in supercomputing infrastructure has been channeled mainly through competitive funds provided by the National Agency for Research and Development (ANID). As a result of this funding, the National Laboratory for High Performance Computing (NLHPC) was created in 2010 by the Center for Mathematical Modeling (CMM) of the University of Chile, together with the Universities of La Frontera, Talca, Federico Santa María, Santiago, Católica de Chile, Católica del Norte and REUNA, which acts on a collaborative basis. Its processing node is housed at the CMM, where Guacolda-Leftraru is installed, the most powerful supercomputer in Chile and one of the most important in Latin America dedicated to academia, with a capacity of 5236 computing cores, 266 TFLOPS of performance, Infiniband connection at 56 Gbps and 4 PB of storage. 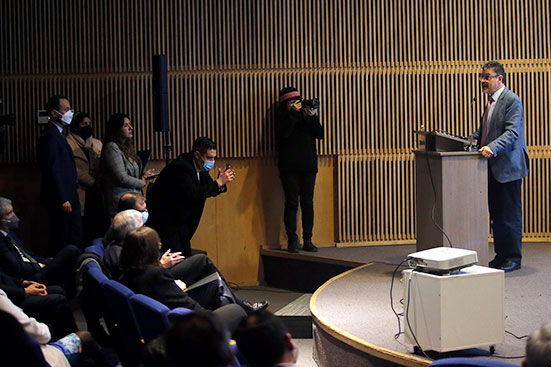 “I want to highlight the signing of this agreement by more than 40 institutions, which establishes the will to move towards an institutional framework that will allow the creation, in the short term, of a National Supercomputing Laboratory, with the objective of guaranteeing data governance and having national sovereignty over this issue, which is so important for the development of our country,” said Minister Salazar.

The funds that allow the operation of the NLHPC come, in addition to ANID, from three other sources: the CMM, the Faculty of Physical and Mathematical Sciences of the University of Chile and contributions from users, which makes the long-term prospect of a project of these characteristics very complex, in which the periodic updating of hardware is critical, as well as being able to form and maintain a specialized professional team. Faced with this challenge, with the experience of more than a decade and having generated bonds of trust with much of the Chilean academic ecosystem, the NLHPC promoted the proposal to move to the next stage, with the creation of the National Laboratory for Supercomputing, which will allow permanent state funding, with a governance that will continue to ensure the best standards of transparency and quality of service, and will take steps to converge with the NLHPC in a common structure.

The Minister of Science, Flavio Salazar, stated that “one of the objectives of the Ministry is to move towards national sovereignty in the capacity of data analysis, in the sense that from the State we can articulate the collection and analysis of data in a common governance. That is why I want to highlight the signing of this agreement of more than 40 institutions, which establishes the will to move towards an institutional framework that allows the creation, in the short term, of a National Supercomputing Laboratory, with the objective of guaranteeing data governance and having that national sovereignty regarding this issue that is so important for the development of our country.” 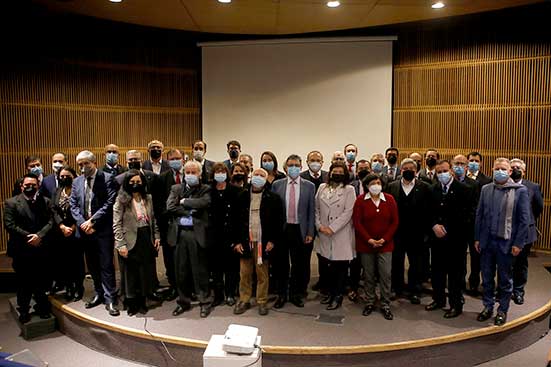 Thirty-nine universities, four research centers and the National University Network (REUNA), signed this Wednesday the agreement for the creation of the National Supercomputing Laboratory.

“For CRUCH universities, and in general for all institutions that do research in Chile, supercomputing is fundamental to keep us competitive in the region and internationally. Without it, entire areas of national research would not be able to carry out research at the highest level as is currently the case, nor be a reference at the global level. This initiative arose as a collaborative project from Chilean universities and its success is the greatest example that, beyond competing, we can and must be able to agree on a greater goal, which otherwise would not be feasible,” said the executive vice president of the Council of Rectors of Chilean Universities (CRUCH) and rector of the University of Santiago de Chile, Juan Manuel Zolezzi.

For her part, the Rector of the Universidad de Chile, Rosa Devés, said that “the development of supercomputing has been a priority for the Universidad de Chile for 12 years, thanks to the work of the CMM and its National Laboratory for High Performance Computing”. She also stated that “due to its scope and strategic importance, there are areas that require a collaborative approach, and supercomputing is one of them. Despite being a challenge – due to the high investments involved in the development of advanced technology – supercomputing also brings enormous rewards. It is our duty to find a strategy that makes its development viable and allows us to take advantage of its potential. A platform such as this one, which will operate under the logic of collaboration and will allow joint and equitable work between institutions and researchers from practically the entire university system, with an international quality standard and state support, is news of the highest level for Chile”. 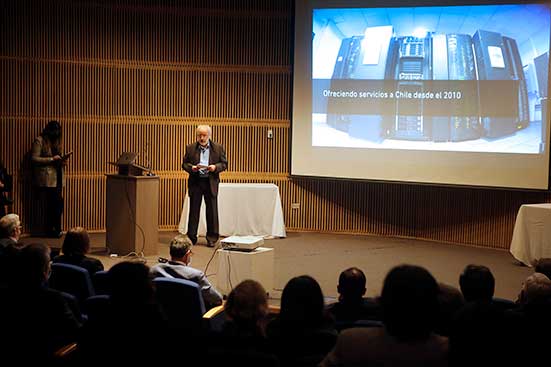 The scientific director of the National Laboratory for High Performance Computing and researcher at the Center for Mathematical Modeling, Jaime San Martín.

Along the same lines, the scientific director of the NLHPC, Jaime San Martín, emphasized that “this new institutional framework seeks to considerably increase the investment of resources and obtain permanent financing from the State, to improve national supercomputing capacities, ensure the periodic renewal of the supercomputer every five years and continue to grow. Chile has to take an important leap forward, we have shown that we have done well for more than 10 years -and we are not saying it ourselves, but hundreds of users and international evaluators-, and it is time to move to the next level”.

In the last year alone, more than 450 users from more than 50 institutions have used NLHPC’s services in 200 different projects, to produce 69 theses and 190 publications in mainstream journals.

With the creation of the National Supercomputing Laboratory, Chile seeks to follow the example of powers such as China, the United States, Japan and Spain, where the State invests millions of dollars in these centers, which are considered of critical importance, not only for the scientific development of countries, but also economically and socially. Under this same logic, the European Union created in 2018 the European High Performance Computing Joint Undertaking (EuroHPC JU), an entity that brings together thirty-two countries, and is jointly funded by its members, with a budget of around 7 billion euros for the period 2021-2027.

At regional level, Argentina is investing five million dollars for the purchase of a new supercomputer that will form part of the National System of High Performance Computing, in a project led by its Ministry of Science, Technology and Innovation, while Brazil has had a policy for years in which the State invests very significant amounts of money in supercomputing; a reflection of this is that they occupy six positions in the TOP500 ranking of the most powerful computers in the world, being the only Latin Americans on the list. 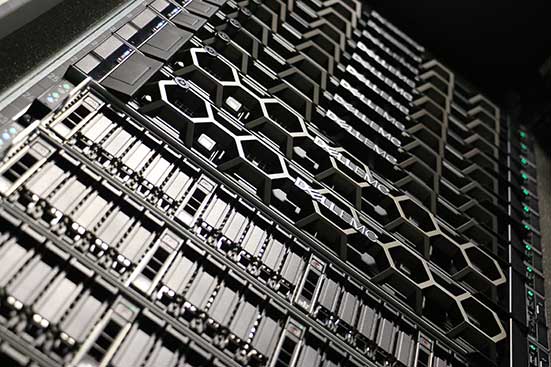 Having the collaboration of experts and reference centers in supercomputing worldwide has also been fundamental for the development of this initiative. “International support has been vital to get to where we are. In 2020 we began the journey that has led us to what is happening today. In January of that year we received a visit from Mateo Valero, director of the Barcelona Supercomputing Center -the most relevant supercomputing center in Spain-, after which we were invited to participate in the European RISC2 project, as one of its sixteen partners and only national representatives. The focus of this project is very relevant to our initiative, as it is centered on promoting supercomputing in Latin America and Europe, and fostering cooperation between both regions. Within this international context, it also fills us with pride and satisfaction that the EU-LAC project has selected us as a reference to invest in the training of other supercomputing administrators in Latin America. This endorses all the efforts made for more than a decade, which place us as a world-class center,” said Ginés Guerrero, executive director of the NLHPC.

The following are part of this initiative: