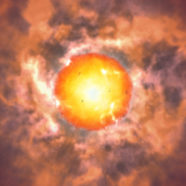 This September, the journal Nature Astronomy will publish the article The delay of shock breakout due to circumstellar material evident in most Type II Supernovae, written by a group of astronomers, mathematicians and computer scientists of the Center for Mathematical Modeling (CMM) of the University of Chile and the Millennium Institute of Astrophysics (MAS), together with other international institutions, after four years of work.

The findings of this study will change what is known about supernovae explosions and the later stages of stellar evolution. Specifically, the research team discovered that supernovae generated from red supergiants—massive stars of great size in the advanced stages of their life cycle—present a flash before the main explosion not predicted by current models.

This light is due to the collision between the expanding gas of the supernova and matter of unknown origin that surrounds the star, explains Francisco Förster, leader of the study: “The presence of this material facilitates extracting part of the enormous amount of energy produced during the explosion and turns it into detectable light.”

The discovery was made possible because the explosions were observed in real time in their initial stages, using data analysis techniques developed in Chile unprecedented for Astronomy, machine learning, astrophysical models created in Japan, and high-performance computing.

“This research is part of the work that the CMM conducts involving the acquisition and structuring of complex databases, formulating methodologies to make sense of these databases, and interpreting the results,” says Alejandro Maass, director of the Center for Mathematical Modeling. “It is undoubtedly a step forward as per the challenges presented by data science in society, academia, and industry.”

For Takashi Moriya, astronomer of the Division of Theoretical Astronomy of the National Astronomical Observatory of Japan, “these findings offer clues regarding the mysterious behavior of massive stars about to explode. When the star is depleting its fuel, some mechanism inside it would cause the loss of material in its outermost areas just before the explosion, but we have no clear indication of what mechanism would cause the above.”

“When we discovered our first supernova in 2014, we immediately realized that it was different from the theoretical models. We saw something new,” recalls Förster. He understood that light is only a small part of the energy released by a supernova; it was clear to him that gases colliding at high-speed could also produce light.

Based on this information, the Chilean researchers asked Moriya to design a new model to explain the unprecedented observations they were noting in the explosion. Moriya managed to make sense of it by considering that there is a stellar wind that increases its intensity almost a thousand times just before the supernova explodes.

“However, we wanted to understand if it was something systematic or just an isolated case for that star,” says Förster.

With the model in hand, the Chilean scientists continued to search for supernovae in real time, just hours after they appeared in the sky. For six nights in 2014 and eight in 2015, they took pictures of the sky with the Dark Energy Camera, a camera of 520 million pixels and the largest in the southern hemisphere, located in the Blanco telescope of the Cerro Tololo Interamerican observatory. They noted 124 outbursts in total. Their supercomputers processed more than a trillion pixels to detect them. Of the total number of explosions, 26 originated from red supergiants and, of these, 24 displayed the flash that had kept the researchers awake for so many sleepless nights.

“The main problem we encountered was that the physical model depended on many parameters: some related to the star, others to the explosion, and others to the wind. We had to identify what parameters could explain our observations, ” Förster recalls. “Exploring all the possibilities through computation was very expensive. That’s why it was an advantage to have a supercomputer in Chile, where we could use advanced data analysis techniques to interpret this information, and with another in Japan, where we generated the models.”

The team entered their observations into the models designed by Moriya. They matched perfectly. On the other hand, the same samples were not consistent with other models known at the time. A discovery had been made.

For the CMM and MAS astronomer, the discovery will open new research opportunities thanks to the large telescopes being built in northern Chile, such as the Large Synoptic Survey Telescope (LSST), which will survey the entire sky every three nights; Förster emphasized, “This will enable us collect more supernova samples, which will let us gain a better understand of this phenomenon.”