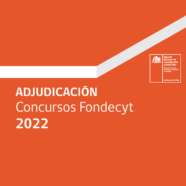 Numerous projects that will receive Fondecyt Regular 2022 funds from ANID in the area of Mathematics, Engineering and Transdisciplinary Research are led by researchers from the Center for Mathematical Modeling (CMM), both at the U. de Chile and U. de Concepción, as well as at the seven universities that are now part of the CMM as associated institutions.

The researcher Gabrielle Nornberg points out that her project A modern theory for Lane-Emden type problems consists of “studying systems of nonlinear partial differential equations that generalize the classical Lane-Emden equation, which in turn is an important model for describing some stellar structures in astrophysics”.

From the theoretical point of view, Nornberg points out that “it is linked to the most famous conjecture about the standard Lane-Emden system, opened more than 30 years ago, about the non-existence of positive solutions in space. We hope to develop solid tools that can contribute to the solvability of the conjecture, as well as relevant adjacent problems in the field of nonlinear differential equations”.

Iván Rapaport reports that the objective of his project Compact Distributed Certification of Hereditary Graph Classes is “the study of decentralized algorithms where agents in a network, along with exchanging information locally, can interact with an “oracle” (a very powerful central entity in terms of computational capacity). This oracle, in formal terms, corresponds to a “tester” that must convince the network agents of the veracity of certain hypotheses”. Rapaport then points to the applications of this project. “With the rise of the Internet, these tester-assisted computer models are more relevant than ever,” says the researcher.

“We can think of asymmetric applications where there is a very powerful central entity that stores a large amount of data (network topology, user preferences and activities, etc.). The central point, which is where the difficulty of algorithm design lies, is that agents distrust the central entity (as it may be malicious, self-serving or flawed) and therefore must convince themselves that the information provided by the oracle is truthful,” explains Rapaport.

In another area, there are eight postdoctoral researchers in mathematics who have benefited from the Concurso Fondecyt de Postdoctorado (Fondecyt Postdoctoral Contest) and sponsored by the universities of Chile, Concepción, Adolfo Ibáñez and Técnica Federico Santa María.

Regarding her project Effective Dirac equations: spectral geometry and standing wave solutions, researcher Hanne Van den Bosch points out that the objective is “to study Dirac operators that describe materials such as graphene”. Van den Bosch explains that “one part is devoted to the relationship between the allowed energy values and their relation to the shapes in which the piece of graphene is cut. The other part proposes to study nonlinear Dirac equations that allow special solutions, about which very little is known”.

The CMM is today the most active scientific research institution in mathematical modeling in Latin America. It is a center of excellence of ANID, located in the Faculty of Physical and Mathematical Sciences of the University of Chile and today integrates eight other associated universities. Its mission is to create mathematics to respond to problems of other sciences, industry and public policies. It seeks to develop science with the highest standards, excellence and rigor in areas such as data science, climate and biodiversity, education, resource management, mining and digital health.